Psilocybe azurescens is a versatile magic mushroom choice due to its versatility and few growing demands. This makes it one of the best magic mushroom species to grow for medicinal and recreational use.

The Psilocybe azurescens is a good shroom for those fighting addictions and other mental health complications like depression and anxiety. Its potency (psilocybin and psilocin concentration) is higher than any other magic mushroom species. Even the Psilocybe cubensis species can’t compare.

Psilocybe azurescens is a species of psychedelic mushroom whose main active compounds are psilocybin and psilocin.

This species is among the most potent of the tryptamine-bearing mushrooms, containing up to (by dry weight);

Averaging to about 1.1% psilocybin and 0.15% psilocin. It belongs to the family Hymenogastraceae in the order of Agaricales. Buy shrooms in Canada here.

This species is the strongest psilocybin mushroom that grows in the wild environment instead of being cultivated indoors by professional growers.

As far as we can tell, its origin began in 1979 when a boy scout troupe came across it during an Oregon camping expedition. The name ‘azurescens’ was coined by Paul Stamets in 1996 in a publication of the magic mushroom. The term refers to the azure or blue colour that is in the mushroom.

Other species in the same genus include the Psilocybe Cyanescens and the Psilocybe Cubensis. According to scientific classifications, it falls under the Basidiomycota division, Agaricomycetes class, Agaricales order, and Hymenogastraceae family.

Like other forms of magic mushrooms, this species is illegal in many countries, including the United States and Canada. But, on the other hand, spore kits can be bought, which allows people to cultivate the drugs without selling or distributing them.

The species grows in tight separated clusters on deciduous wood chips and sandy soils rich in wood debris. Apart from the wood chips, you can also find them on coastal dune grasses. The mycelium in the plant is very tough, enough to hold the myceliated substrate tightly. 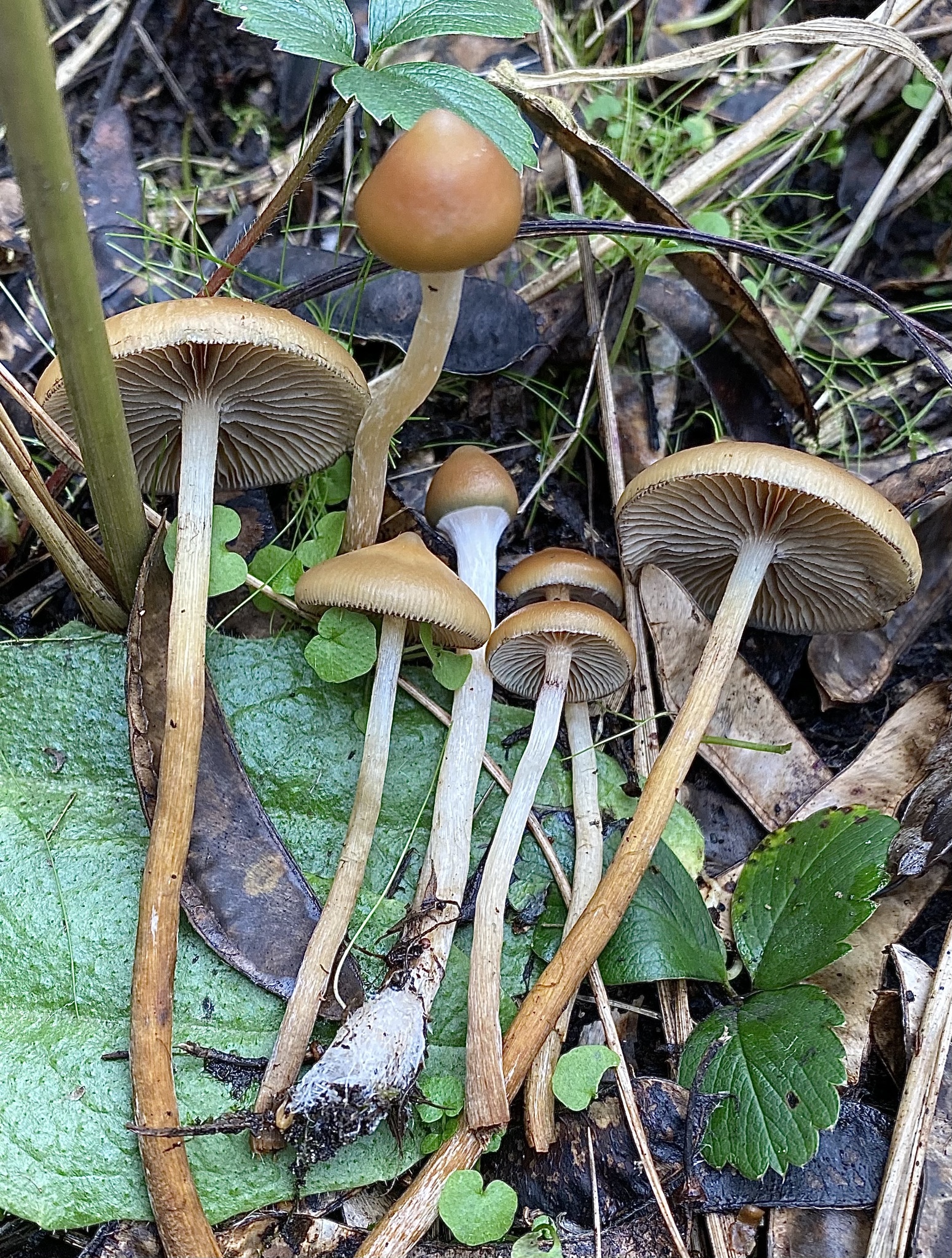 They are prevalent in moist patches of land that are not given direct sunlight. A damp climate is favourable for the plant since it takes up to 6 months to reach the fruiting season. Keep in mind that the harvesting period will vary depending on the environmental conditions and cultivation process.

According to Psilocybin Mushrooms of The World by Paul Stamets, the fruiting period is typically around late September and can continue till late December and early January. The shrooms are capable of enduring harsh cold temperatures that can range from 25 to 68 degrees Fahrenheit.

The Psilocybe azurescens is cultivated in many countries, including Netherlands, Germany, New Zealand, United States, United Kingdom, and Canada. They grow in the wild in regions like Oregon, Columbia River Delta, Long Beach, and small parts of the North American west coast. However, they are spread throughout the wild due to their ease of cultivation.

The cap of the Psilocybe azurescens is 30-300 mm in diameter and has a conic to a convex shape. As the plant matures, the cap expands and eventually flattens with age to form a broad umbo. The cap surface is smooth and viscous when it is wet.

The plant has a dark purplish-brown spore print that can sometimes look purplish black. The stipe is silky white and is 9- – 200 mm in length. The thickness ranges from 3 mm to 6 mm, and the base of the stipe is typically curved with coarse white tufts of mycelium.

Psilocybe azurescens contains 1.8% psilocybin, 0.5% psilocin, and 0.4% baeocystin. Psilocybin is the hallucinogenic chemical compound in the magic mushroom that plays a major role in causing psychedelic effects.

Psilocybin is used for both medical and recreational purposes because it provides euphoric and spiritual awakening experiences. Its effects are compared to LSD and other psychedelic drugs that cause hallucinations.

The compound is not considered addictive, according to medical experts. However, the psychological dependency on the drug may make it hard for people to quit. Moreover, the drug comes with other effects that may deter users, such as terrifying hallucinations, panic attacks, and anxiety after using it.

The main effects of Psilocybe azurescens include time distortions (altered perception of time and space), visual hallucinations, and extreme mood changes (euphoric feelings will usually take over). Other effects include spiritual awakening, visual distortions that have vivid colours, and unusual body sensations.

When it comes to medicinal use, psilocybin products have proven to be a promising treatment for depression when combined with professional psychological support. According to a Johns Hopkins Medicine study, two doses and psychotherapy can achieve remission in patients in just four weeks.

Buying, selling, growing, and consuming magic shrooms is illegal in Canada. Possession of magic mushrooms can land you up to 6 months in jail, get you a $1000 fine, or both.

However, medicinal use of the drug is becoming more popular, and as of 2020, more than 50 patients and doctors received legal permits to consume and study magic shrooms.

This was made possible through special government programs that exempted the parties from being prosecuted by law enforcement.

Psychedelics are classified as controlled substances that are prohibited by law under the Controlled Drugs and Substances Act.

Although they fall under the ‘Controlled Drugs and Substances Act (CDSA), there are some cases where exceptions can be made under provision section 56.

There is hope for change in the future, though. Now that cannabis has been legalized and widely accepted for medicinal use, many anticipate magic mushrooms will follow in its footsteps.

Luckily, the sale of magic mushrooms is widely overlooked as police focus their efforts on more harmful drug-related activities and drug organizations. However, it is still clearly stated as an illegal substance even if you buy magic mushrooms online.

Where to buy magic mushrooms online in Canada

You can easily buy psilocybe azurescens magic mushrooms online in Canada from The Fun Guys. Online magic mushrooms dispensaries like ours have secure and safe transactions policies that ensure your purchases are well-taken care of. In addition, with discrete shipping methods, you can be assured of safe purchases by just adding an item to your shopping cart.

You can opt for our micro-dose option above, which will cost you between $69 and $300, depending on the dosage. The product contains 200 mg capsules that come from organic, gluten-free, and vegan-friendly ingredients.

Our Psilocybe azurescens is what you need to boost your energy, increase focus and productivity, increase creativity, and elevate your moods to resist stress.

The micro-doses of Psilocybe azurescens are enough to keep you grounded while still reducing unwanted effects that prevent you from functioning normally.

Buy Psilocybe Azurescens shrooms online if you may be suffering from conditions like ADHD, addiction, Alzheimer’s disease, anxiety, depression, OCD, and PTSD. This species is highly potent and can have immense benefits for people with these conditions.

USE CODE: TFG For 20% off @ Checkout Dismiss